It can be difficult to criticize a company whose entire business model is completely driven by philanthropy and a strong social mission. But this is exactly what TOMS Shoes has been experiencing this past year. Journalists are making harsh critiques about the company’s one-for-one business model and questioning its true sustainability. The criticism is rooted in the argument that simply giving away shoes to needy children in developing countries is not really helping to tackle the underlying issue of poverty that created the need in the first place. This may sound harsh considering TOMS is doing a lot more than many other companies in terms of social responsibility, but it is clear that the one-for-one strategy is flawed in some ways. In this paper I will discuss the one-for-one business model of TOMS Shoes and analyze its ethical implications from a utilitarian perspective, arguing that giving away shoes does not maximize the long term wellbeing of children in need and the communities they live in.

TOMS Shoes and the One-For-One Model:

Blake Mycoskie, the Founder and “Chief Shoe Giver” of TOMS Shoes, has always had an adventurous and entrepreneurial spirit. He has started five businesses in his lifetime and competed on the television show the Amazing Race. He was inspired to create TOMS Shoes when he travelled to Argentina in 2006 and witnessed the hardships of children in rural communities living without shoes. In an effort to alleviate this problem he created a for-profit business centered on a core social mission. For every pair of shoes purchased TOMS would donate a pair of new shoes to a child in need, and thus, the one-for-one business model was born. (TOMS.com) (See Figure 1).

Currently, TOMS gives shoes in over 60 countries around the world and has given approximately 10 million shoes to needy children worldwide (See Figure 2). It collaborates with more than 75 Shoe Giving Partners to distribute the shoes once customers make their purchases. The organizations then integrate the shoes into their broader programs to help children and developing communities. In order to create an even stronger social movement, TOMS also created the One Day Without Shoes campaign. This is an annual day where supporters go without shoes to bring global awareness to the hardships experienced by children in developing countries. (TOMS.com).

Shoes are an important resource and provide many benefits for children in need. The most significant of these are related to health. Shoes protect children’s feet from cuts, injury, infections, and soil based diseases such as podoconiosis. Walking is the primary source of transportation in these communities and children must walk long distances in order to reach essential services such as education, water, and medical help. Additionally, shoes are often required in order for children to attend school and receive an education (Shetrawski, 2004). TOMS hopes that by donating shoes it will increase the health and wellbeing of children, providing them with more opportunity to learn and be successful in the future.

There is still another important factor to consider, however: children’s feet grow really quickly. Sure, a new pair of shoes can help a child in need for a few months, but what happens when they outgrow the shoes or they become too worn down to wear? TOMS says that it keeps track of every child it gives to and will continue to provide shoes as they are outgrown, but many are questioning the feasibility of that kind of tracking system (Sarwar 2012). Herein lies the essential problem with the one-for-one business model. Giving away shoes is more of a short term fix and fails to address the need for long term solutions for the issue of poverty.

A Utilitarian Approach to TOMS Shoes:

Utilitarian ethics provides a good framework to assess the ethical implications of TOMS’s business model. Utilitarianism is a consequentialist theory which says that “an ethical decision should maximize benefits to society and minimize harms” (Trevino & Nelson 2004). Essentially, choices should be made so that overall wellbeing is maximized. In the case of TOMS Shoes, donating a pair of shoes only benefits a single child for a short period of time. Utilitarianists would argue that TOMS could be doing more to maximize the long term wellbeing of entire communities by tackling the core issue of poverty which created the need for shoes in the first place.

This is the basis for much of the criticism targeted at TOMS. Many journalists argue that the one-for-one business model lacks sustainability and longevity. Essentially, it provides limited long term good for the developing nations in which it donates. Some even argue that giving away shoes actually works against the long term development goals of these countries by undermining local businesses and creating an aid-based economy. A more sustainable approach could be to provide growth opportunities for local shoemakers and other entrepreneurs. This allows communities in need to develop on their own and sustain into the future, rather than creating an economy that is reliant on aid and donations.

Furthermore, the business model actually relies on the existence of poor children who need shoes. The business can only be sustained as long as there is a need for shoes in developing countries (Herrera, 2013). This need is an essential part of the company’s marketing strategy and is what attracts consumers to purchase shoes. Clearly there is a disconnect between the company’s social mission to and aid communities suffering from poverty and their drive to sell shoes and make a profit. The one-for-one model is a brilliant marketing technique, in that it creates strong appeal to consumers who feel like they are doing good by buying the product (Binkley, 2010). One could even argue that the business model was created to make consumers feel good and drive up sales, not necessarily to alleviate poverty or help developing communities. The potential flaws of the unsustainable model, however, are masked by the perceived philanthropic attributes of the product.

Another important aspect of utilitarian ethics is “identifying the alternative actions and their consequences for all stakeholders” (Trevino & Nelson 2004). For TOMS, the possible actions would be to keep the one-for-one business model or to change its approach to aiding children and communities in need. The benefits of the one-for-one model include a strong marketing campaign, increased sales and profits, and short term aid for children in the form of disease prevention and access to education. The costs include a lack of sustainability in terms of alleviating the underlying issue of poverty and harsh criticism and bad publicity. The alternative action would be to change the one-for-one model which would yield benefits such as long term solutions for developing communities in the form of infrastructure, access to higher paying jobs, and increased overall livelihood. The only potential costs would be the possible financial burden on the company to instill these new kinds of programs.

As we analyze the benefits and costs of each course of action we must think broadly about the effects on “society” as a whole and not think too narrowly (Trevino & Nelson 2004). In this case we must consider more how the potential actions will affect whole communities in the long term rather than how they affect individuals or the company. Keeping this in mind, it becomes clear that the choice which results in the most utility for society as a whole is to alter the one-for-one business model and create more sustainable approaches to providing aid for children and communities in need.

In response to the harsh criticism towards its one-for-one business model, TOMS has recently been making various changes to increase its sustainability. One way in which TOMS is achieving this is through the addition of its line of eyewear. The eyewear is still a one-for-one purchase, however the process is different than giving away shoes because it provides more sustained value for developing communities and society as a whole. According to utilitarian ethics this strategy is the more ethical action because the overall benefits are maximized.

When a customer buys a pair of TOMS Eyewear, the company provides funding to its Giving Partners to help restore the sight of one individual in need. This restoration comes in the form of prescription glasses, eye surgery, or other medical treatment (TOMS.com) (See Figure 3). Herrera articulates in her New York Times article that “the root cause of poverty in many developing countries is a lack of access to fair-paying, sustainable employment” (2013). The eyewear line tackles this issue by contributing to the employment of local nurses and doctors in developing communities. The sight support and surgeries will also make people more employable. With higher chances of getting a job, these individuals will be more likely to establish a sustainable living and eventually get themselves out of poverty (Herrera 2013).

Another way in which TOMS is changing in order to create more sustained value for communities in need is by building factories in the countries where they are donating shoes. Currently, the shoes are made in Ethiopia, Kenya, Argentina, and China (See Figure 2). The company’s goal is to produce one third of its donated shoes in the countries where it gives them. It is looking to expand its manufacturing to India and parts of Africa (TOMS.com). Producing the shoes locally will create and support jobs in the places where they are needed. TOMS is also operating under strict guidelines in partnership with local business owners in order to ensure that their Shoe Giving is sustainable and does not disrupt local shoe businesses (Shetrawski 2012).

TOMS has also made changes to its website with the addition of The Marketplace, a platform for other social entrepreneurs to develop their businesses. This is something new for TOMS because it shifts the focus away from the company itself, establishing a more sustainable type of giving that addresses a broader range of issues. The Marketplace allows social entrepreneurs to promote their businesses and causes on the TOMS website. Some of the products provide employment and economic opportunities for those in need, while others use a portion of their profits to support other types of positive change such as hunger, education, the environment, etc. This type of platform allows TOMS to support various types of giving and social causes, thereby maximizing the overall wellbeing of society. Blake Mycoskie also wrote a book and created a foundation called “Start Something That Matters” to help social entrepreneurs launch their businesses (TOMS.com).

In order to become a more sustainable social enterprise TOMS must continue to make these kinds of changes to its business model and giving strategy. The one-for-one model seems completely ethical and responsible on the surface, but it clearly has flaws and does not maximize the overall long term wellbeing of societies in need. The company’s decision to evolve its giving and change the business model was an ethical choice because it addresses sustainable giving that will lead to increased livelihood for those suffering from poverty. 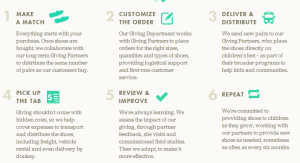 What do YOU think? Tell us! Cancel reply