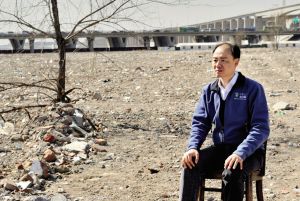 We can all agree that our world’s current level of pollution production contributes to impending global environmental problems.  Many consumers and industries use finite natural resources irresponsibly, turning a blind eye to sustainability in favor of profit, and damaging our irreplaceable environment.  These levels of consumption coupled with poor regulation show insensitivity to sustainability.  We have all learned about China’s environmental problems sprouting from industrialization and their growing, largely unregulated economy. While some journalists like Mike Daisy turn to sensationalizing stories to drive attention and motivate citizens, Ma Jun proactively seeks to solve this problem through transparency and fact.  According to Jun,

“When I look at China’s environmental problems, the real barrier is not lack of technology or money. “It’s lack of motivation.”

Ma Jun believed that motivation should come from regulatory environment, but it is week and environmental litigation is almost impossible.  Therefore, there is a desperate need for public participation to generate motivation.  Ma Jun began to drive motivation and create awareness through his publication 1999 publication, China’s Water Crisis, a nonfiction book and national wake-up call about pollution, often compared to Rachel Carson’s Silent Spring.  Then, after studying comparative environmental management laws and system he founded the Institute of Public & Environmental Affairs (IPE), a Beijing-based green NGO. IPE’s Water Pollution Map showed water,air and heavy-metal pollution based per region and company-exposing the corporate world’s practices. Walmart was the first large company to begin using the IPE to screen its factories.  Ma Jun used this platform create a campaign that linked 29 global tech companies to severe heavy metal pollution in China. Furthermore, after Ma Jun eventually partnered with Apple to address its oversight of suppliers.  This partnership culminated in increased pressure on apple to consent to inspect factories in its supply chain.

With Ma Jun, and other ideas, like this Beijing’s sun will one day shine again.  This idea and ways of practice seek to address China’s environmental pollution, yet this topic touches on a number of issues from global brands, globalization, and multinational corporations, government and industry regulation.  With this small fix we can see big changes around the world.

One thought on “Ma Jun’s Solution to Pollution”

What do YOU think? Tell us! Cancel reply